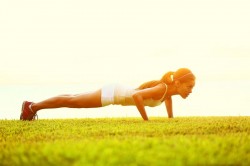 You may have spotted a group of people stretching, squatting, lunging and

and wondered what they were doing?

It was a class put together by Heather Mary King, a qualified yoga teacher.

Inspired by the Bikram Yoga classes she was taking when she was in London.

Often taken in a hot sauna because the method is based upon heat in the muscles.

The thinking was, instead of having a sauna, we get the muscles warm by generating our own heat because if they are cold they can snap.  That is why we do the running first because in England it is too cold and we might cause more damage.  The science for that came from Bikram.  It is quite a craze in London, Fearne Cotton and Russell Brand and do it.  Heather realised that muscles generate their own heat during exercise.  She intersperses yoga poses and stretches throughout the run.  Taking advantage of the fact that a runner’s muscles get warm as they jog giving people the cardiovascular benefits of the jogging, and the stretching and balancing benefits of yoga.  Heather believes they both improve stamina and are a perfect pair.  Heather has also adapted the various disciplines of yoga to create the type of class that would appeal to like-minded people wanting to get fit in a fun way.  Classes stay true to these movements and that of Ashtanga Yoga which is active and Yin Yoga which involves holding postures for a long time.

Even the most hardened sportsmen are now using yoga as part of their everyday fitness and training regime. There was a time when your average man would have never be seen at a yoga class.

Yoga on its own does not get you fit

So Heather created a logo for ‘yogging’ and has had it protected.  After moving back to Whitby, where she launched her first classes last year at Whitby Leisure Centre.  There are both men and women turning up to each session which are all held outdoors whatever the weather.

The idea is this:  Use the benefits of Yoga moves for balance, strength, stamina, relaxation and muscle toning to help improve flexibility and counter balance the effects of short bursts of running for fat burning.

Coming up with the idea when she was living in London.  Heather was running around the local park and doing a yoga class afterwards.

It was also around the same time that the British Military Fitness boot-camps (outdoor classes run by military personnel) were becoming established and sweeping the nation.

She was doing a lot of fitness and would put on her headphones and do laps of the park to keep fit rather than go to a sweaty gym.  If the weather was nice, there were other women running and doing yoga later outdoors too.

Wanting to join a running club but not having a lot of spare time.  So it is like a 2 in one for busy people. Yoga on its own does not get you fit and does not get the heart rate going but running does.”

Heather advised that it takes a while to get your confidence up when you are teaching.  Some people come and do yoga in a very spiritual way.  Because she is sporty Heather focus on the actual physicality of it.

It is well documented that part of the reason Ryan Giggs, a Manchester United player has been able to carry on playing at the top flight into his late 30s is because he uses yoga moves to repair and improve his muscles.  Wimbledon champion Andy Murray is also said to be a fan.

The beach is the perfect place for it.  You can’t deny that there is something pretty special about working out on the beach on a sunny evening with the backdrop of the sea.  You get out what you put in and it is important to keep moving.  Obviously with yoga there is an element of inner strength and spirituality going on and by doing this on the beach it really can’t get any better.