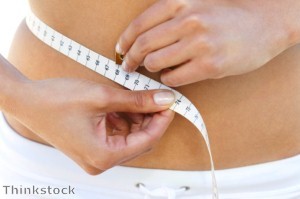 Are you constantly embarking on the latest fad diet, losing a few pounds but then piling it all back on again? If the answer's yes, then you're not alone. Recent research seems to suggest that the majority of women have done this at least once in their lifetime.

A survey of over 1,200 women conducted by YouGov found that a whopping 69 per cent had embarked on a diet at some point in their lives.

Of these, only a miniscule five per cent managed to lose weight and keep it off.

Some 18 per cent of those quizzed said they had tried one or two diets but put the pounds back on again and 19 per cent said they had done this with between three and five different diets.

A further ten per cent of the women surveyed said they'd tried between five and ten diets and five per cent said they'd given ten to 20 diets a go, only to revert back to their original weight again afterwards.

Six per cent of the women questioned by YouGov were the truest yo-yo dieters around, having tried more than 20 diets during their lifetime.

Which is the region of biggest losers?

Interestingly, the survey results are broken down by region, so we now know which geographical area contains the most slimmers, whether successful in their weight loss missions or not.

The region in which the most people have embarked on a diet, lost weight and kept it off is Wales.

In this country, which is the home of celeb yo-yo dieter Charlotte Church, some 11 per cent said that they have dieted and then kept their weight under control.

Northern Ireland, Scotland and the north-east of England had the worst record for this though, with just three per cent of those in these areas having managed to keep weight off post-dieting.

A massive 60 per cent of those living in the north-east told YouGov that they had never been on a diet, compared to just 37 per cent in Yorkshire and the Humber.

"In reality, these diets can rarely be kept up in the long term as hunger, feelings of deprivation or other possible side-effects force people who follow them to give up and go back to their old way of eating, causing them to put any weight they lost back on again," she explained.

So what kind of diet should we be sticking to?

She advised slimmers to instead opt for one that is "rich in low-energy-dense foods", including fruit, vegetables, pasta, potatoes, rice, fish and lean meat, as these "fill you up and are naturally low in calories".

Numerous studies over the years have sung the praises of this type of eating plan, or Mediterranean diet.

Just a few weeks ago, a piece published in the Journal of the American College of Cardiology revealed that the Mediterranean diet not only helps people to reduce their waist size, but has a positive effect on cholesterol and blood pressure levels.

All of these factors mean that a person is at less risk of developing heart disease and diabetes.

Sticking to this type of diet may not seem easy, but give it your best shot and you could achieve your weight loss goals much more quickly than you thought possible.