Would you go on a drip diet? - Slimming Solutions

Would you go on a drip diet? 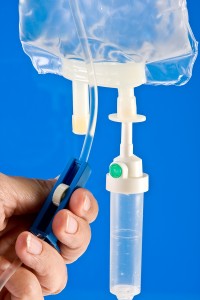 Imagine being fed on a drip for 10 days….just to lose weight.  Well that’s the latest weight loss craze sweeping America – and we’re not far behind.

Sitting on a bed in a doctor’s surgery, Lanell Fagan nodded, signaling her readiness for the procedure to start.  As the 3ft 10in long tube is inserted through her nose, she begins to swallow, helping thread it down her throat and into her stomach.

But now your probably wondering what awful illness Lanell has that brought her to this point.  A long battle with cancer? Years of struggling with a genetic heart condition?  In fact, its neither of those things.  Lanell isn’t sick at all: she’s just dying to be thin.  In a bid to drop a dress size or two, more and more women are turning to the controversial Ketogenic Enteral Nutrition (KEN) drip diet, which sees patients survive for 10 days without eating.

Not a morsel of food

Instead of food, Lanell, 46, mum to eight year old Alaya, was drip fed a mixture of protein, fat and water.  She went about her life as normal, carrying the pump and formula in her Chanel handbag as the plastic tube which was taped to her face for the duration of the treatment, delivered a miniscule 800 calories a day directly into her stomach.  Able only to drink water, tea or coffee, not a morsel of food passed Lanell’s lips.

If you’re thinking this is another crazy fad from across the pond, then think again.  Actually, this worrying trend – which sees fat burned off in a process called ketosis – originated far closer to home, in Italy.  And since reaching our shores last year, it’s popularity has soared – equal in measure only to the outrage it has incited in it’s critics.  Among the most vocal of these are the physiologists, who worry that this lose weight fast way of thinking could cloud a dieter’s mind and it is not going to be able to catch up with the newer, skinnier you.

‘Unless you’re actually unwell, it’s not normal to walk around with a feeding tube in your nose,’ says psychologist Nadine Field, director of psychologyonline.co.uk.  ‘These days’s we’ve become so used to seeing drastic weight loss ideas that we’re de-sensitized as to how extreme they actually are.  It’s this sort of dangerous mentality that makes us more likely to undertake such diets without actually thinking about what we’re doing.’

Lanell had the procedure in may this year. ‘First of all I was told to snort a concoction of painkillers before the doctor put the tube through one nostril,’ she explains.  “Then I was given a short tutorial on how to use the machine and sent on my way.

‘The first 48 hours were awful.  I was starving, had a terrible headache, zero energy and people even stared at me in the street – one even asked if I was going through chemotherapy.’

Disturbing isn’t it?  The question on everyone’s lips, of course, is, ‘Does it actually work?’More importantly is it safe? The short answer is yes, it does work, with Lanell losing almost 2st in just under 2 weeks – but the question of safety is a very different issue.  Though it’s difficult to dispute the appeal of fast weight loss – Lanell dropped from a size 12 to a size 6 – a spokesperson for the British Dietetic Association (BDA) warns it can do serious harm.  ‘There are huge risks involved with this practice,’ says Jennifer Low. ‘Not only can it cause dizziness and fatigue, over the long term it can lead to muscle and hair loss.  It’s starvation, which is obviously never an advisable way to lose weight.  And although people do get swept up by the idea of a quick fix, it’s important to remember that extreme diets might make you look good initially, but they are totally unsustainable.’ So what drove Lanell to such extreme lengths? ‘It was my last resort,’ she concedes.  ‘I had a knee operation in 2008 that made it impossible to exercise.’

That, combined with the stress of going through a divorce and the extra financial pressure of the recession, meant Lanell’s weight increased – although she was hardly fat.  ‘I got to 10st and, at 5ft 8in, I felt huge,’ she explains.  ‘I tried every diet, but nothing worked.  When my daughter told me my bum looked big I knew I had to do something.’

Lanell took to the internet and found a clinic in Miami that offered the diet for £1,060.  The first thing they did was check Lanell’s Body Mass Index (BMI), the scale that measures whether your over or underweight.  And, astonishingly, despite her BMI of 22.8 being well within the healthy range of 18 to 25, the doctor agreed to go ahead with the procedure. ‘This is something we would never allow at our clinic,’ says David Abdo, clinical manager at Weight Management Systems in London’s Harley Street, who offer the procedure.  ‘We’re very unhappy that such a practice is happening in America.  At our clinic we only administer the KEN drip to people with a BMI over 25.’

Psychologist Nadine is equally concerned and urges anyone considering an extreme diet to speak to a counselor. ‘Often people are trying to live up to unrealistic ideals and it can be an early sign of body dysmorphia, where people excessively fret about their body image,’ she says.

But Lanell doesn’t share her anxiety.  ‘The diet was the best thing I’ve ever done.  Once I got over the bumpy start and reached day three I felt amazing.  My energy levels were really high, the cravings had disappeared and I barely even noticed the tube in my nose.  But more importantly, it’s made me rethink my eating habits and now I’m more health conscious.’  Lanell is predictably quick to dispel the idea that it’s unsafe.  ‘There are risks involved with everything: of course there will be people who abuse the diets, but doctors are always there to ensure that doesn’t happen,’ she explains. ‘I know using a feeding tube to diet sounds insane, but for me it was the only thing that worked.  My bum isn’t big anymore and I’m far more confident in my new body – surely that can only be a good thing:’  The diet clearly has it’s fans, but while you may drop a dress size or two, given the associated health risks, psychological scarring and a whopping price tag, we definitely won’t be opting for one anytime soon.