Women worry about being fat ‘three times a day’ 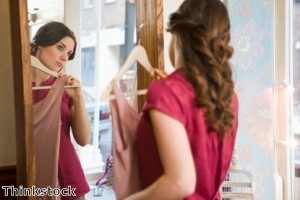 The average woman worries about being overweight three times a day, while 80% of UK women are unhappy with their appearance in some way, the latest study suggests.

According to the research carried out by the hotel chain Travelodge, men are also concerned about their appearance, with 61% of males worrying about their looks three times a day.

In an ideal world, the average woman would piece together the body parts of celebrities to form the ideal figure, with the survey respondents citing Cameron Diaz’s legs, Kim Kardashian’s bottom, Gisele Bundchen’s flat stomach and singer Jessica Simpson’s bust as the components of the perfect figure.

Travelodge spokeswoman Shakila Ahmed told the Daily Mail it is clear we are now living in a celebrity obsessed culture where image is everything.

“And now more women and men are feeling more self conscious about their appearance. Many Brits feel the pressure to look just as good and it’s having a huge impact on their lives,” she noted.

Ms Ahmed said it is “staggering” that such a large proportion of men and women find themselves worrying about their weight every day.

How often do you worry about your appearance?