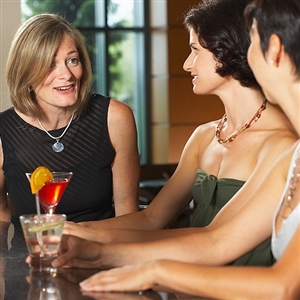 Women who drink moderately gain less weight than those who do not drink, a recent study has suggested.

Researchers from Brigham and Women’s Hospital in the US studied 19,220 women aged 39 or over who were of a normal weight.

The participants were quizzed on how much alcohol they drank on average per day and then had their weight measured over the following 13 years.

Most of the women gained weight progressively over the period, but those who did not drink alcohol at all gained the most body mass, with weight gain decreasing as alcohol intake increased.

“An inverse association between alcohol intake and risk of becoming overweight or obese was noted for all four types of alcoholic beverages [red wine, white wine, beer and liquor],” according to the study’s authors.

They went on to explain that those who drank red wine were least likely to become obese, followed by white wine.

According to the hospital, alcohol contains around seven calories per gram.

The NHS claims that over ten million people in England drink more than the recommended daily amount, which can cause liver damage and other health problems, so regardless of the recent research, make sure you do not over-do it on the drink.

Do you keep track of how much alcohol you drink each week?