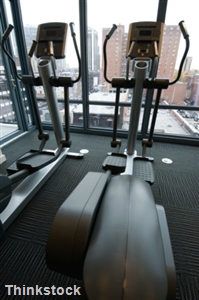 A woman from Kent has lost a massive 4st 3lb through joining a gym and exercising regularly.

Retired nurse Stephanie Leslie, 86, visits her local fitness centre four times a week and uses a number of different gym machines to get her heart pumping, the Kentish Express reports.

She signed up to the gym after her doctor advised her to lose weight, as at 5ft, the grandmother weighed in at 11st 9lb.

Ms Leslie now weighs 7st 6lbs thanks to her regular sessions on the exercise bikes, rowing machines, steppers and other equipment.

"Some days I'll wake up feeling groggy and going to the gym completely invigorates me," she told the newspaper.

As well as giving people energy, exercise has many other benefits, such as aiding sleep.

This is according to Professor Jim Horne, the director of the Sleep Research Centre at Loughborough University, who explained to the Daily Telegraph that going for a walk each day can lead to a sounder night's sleep as it tires out the brain.

Do you have a gym membership?If so, how often do you go?