Waiters and waitresses 'are the fittest workers' - Slimming Solutions

Waiters and waitresses ‘are the fittest workers’ 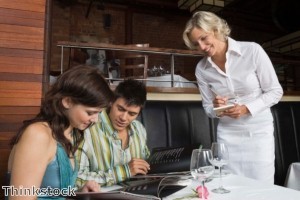 People who work in waiter and waitress jobs are fitter than any other type of employee, due to the significant amount of incidental exercise that they do.

Research carried out by Jenny Craig aimed to work out which type of employee took the highest number of steps during the day, and found that waiters and waitresses clocked an average of 22,778 a day.

When this is combined with the heavy plates that they often carry simultaneously, these workers were by far the most active.

The second most active staff were those who worked in hospitals, specifically nurses, while the least fit workers were perhaps unsurprisingly office staff, due to the amount of time they spent sat at a desk.

Nathan Johnson, a spokesman for Jenny Craig, said people hoping to stay in shape should be aiming for a minimum of 10,000 steps per day in order to get the basic benefits of physical activity, such as improved heart health, lower cholesterol levels and a boost in perceived well-being.”

Do you get plenty of exercise in your job?