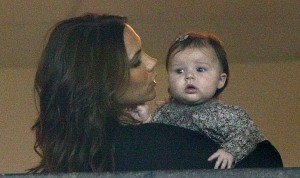 Victoria Beckham has revealed that a fitness regime which involved the star running six times a week has helped her get back in shape following her latest pregnancy.

The former Spice Girl shocked many in attendance at the New York Fashion Week recently when she showcased an amazing post-baby body just eight weeks after giving birth to Harper Seven.

However, Victoria has told Vogue US that there were no major secrets into how she trimmed the pounds so quickly, with a few jogs doing the job.

"I worked out a lot. I ran a lot. I did it six days a week. I become quite obsessive when I get into something," the well-loved WAG explained.

Victoria, who has since stepped away from the music scene and into the design industry, also revealed that much of her clothing is based on her incredible frame.

"I've never been a six-foot-tall, skinny model, so therefore I wanted to create an illusion," she disclosed to the publication.

Someone Like You singer Adele has also recently stated to The Sun that she has taken up exercise sessions with a personal trainer in order to become healthier and fitter.

What is your fitness regime following pregnancy?