The ‘Vegan Before 6’ Diet - Slimming Solutions

The ‘Vegan Before 6’ Diet 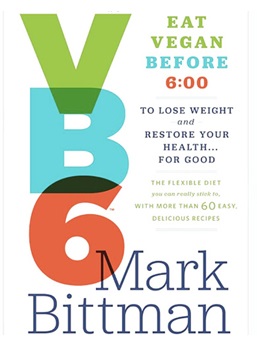 Vegan Before 6 is the latest diet craze to gain momentum in America.

Who invented it?
New York Times food columnist and author of How To Cook Anything, Mark Bittman, first wrote about eating vegan until 6pm in a 2009 article. Living this way reportedly helped him lose 36 lbs, and reduced his cholesterol and blood sugar levels. Now he’s turned the idea into a diet book, VB6.

Where did the idea come from?
Bittman’s doctor told him to reduce his cholesterol and blood sugar levels, and prescribed drugs and surgery as a solution. A friend suggested that Bittman should become vegan instead. Being a full-time vegan wasn’t an option for the food columnist, so he decided to eat as many plant-based foods as possible during the day, then allowing himself to have whatever he wanted at dinner.

How does it work?
VB6 taps into the mentality behind diets like the 5:2 fasting plan – you only need to restrain yourself part time, with the promise of rewards later in the day. Bittman believes the diet is a pragmatic solution to losing weight and becoming healthier.

Is it effective?
Eating a more plant-based diet is universally recognised as a way of improving your health and reducing your calorie intake. The logic behind the diet is also appealing because you only have to be disciplined part of the time, which should make VB6 easier to sustain long-term compared to stricter diet plans.

What do the experts say?
‘Bittman was following a strict vegan diet in the daytime but, more than that, he was also cutting out white bread, rice, pasta, junk food and alcohol. This means he was essentially following a wholefood diet, rich in vegetables, wholegrains, legumes, nuts and seeds,’ explains Daisy Connor, nutritional therapist at The Nutri Centre.

‘This is a great way of increasing one’s healthy food intake – providing you don’t go crazy right before bed. If the evening meal continues in moderation, with meat, fish, vegetables and wholefoods, then great. However, if this diet is used as an excuse to binge on pizza, sweets, cake and alcohol every night, then the end result is unlikely to be excellent health.’