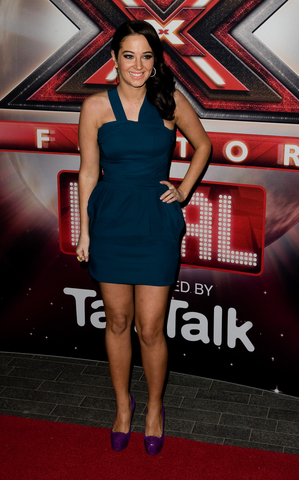 Nearly every celebrity strives to maintain their fabulous figure by getting up early morning and hitting the gym or by having personal trainers move into their homes, however X Factor judge Tulisa Contostavlos has the best diet plan ever: pull on a pair of Spanx and keep eating what you want!

Tulisa flashed her Spanx Shapewear on The X Factor last year and a source has revealed “going to the gym is the last thing she wants to do”.

It has been reported that 24 year old former N-Dubz singer didn’t have time to exercise whilst working on the x factor so just turned to Spanx to stay streamlined.

“She gets calorie-controlled meals delivered and puts them in the microwave if she’s in a rush” says a friend. “But it’s tough with her schedule – often she wakes up feeling tired and eats junk that gives her a short-term energy boost” they added.

The new wag rarely hits the headlines for slimming and she revealed last year, “I eat whatever I want and I never to the gym or work out. I love food; it’s hard for me not to overindulge”.

It just shows you can still eat whatever your heart desires and still look fab with a little help from Spanx!

You will not be surprised but Spanx is adored by the Hollywood a-listers too as reality star Kim Kardashian recently told Lorraine Kelly that Spanx are “the greatest invention”, whilst Jennifer Garner has been quoted saying “You guys have no idea how many friends I’ve turned onto Spanx!” and Kelly Osborne claimed spanx are her favourite underwear saying “I don’t do sexy underwear”.

Could you live without your Spanx?