TOWIE’s Sam: ‘I cut out booze and carbs to get a flat tum’ - Slimming Solutions

TOWIE’s Sam: ‘I cut out booze and carbs to get a flat tum’ 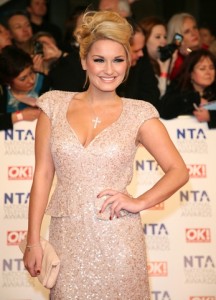 Posing for the cameras, TOWIE’s Sam Faiers shows of her enviably slim legs and toned stomach.  But rewind to a couple of months ago and she was feeling anything but confident.  A summer of overindulging on boozy holidays to Marbella and Las Vegas had left her feeling bloated, unhealthy and wanting to lose weight.  Sam, 21 – whose holiday diet included champagne and pancakes for breakfast, burgers for lunch and carb-heavy room service sandwiches – says: “We went out to eat a lot, especially in Vegas.  We were going to pool parties and drinking Malibu cocktails in the day, having wine with dinner, then vodka and cranberry when we went clubbing at night.  It was hard to resist carb-heavy food the next day with a hangover!”

But after seeing bikini photos of herself in Vegas in June, 5ft 6 Sam decided to embark on a slimming health kick.  Though already a slim 9st 12lbs and a size 10, she wanted to ditch the bad habits and tone up.  She adds: “When I saw the pictures I thought: ‘I want to lose that tummy!’  They made me look like I was 5ft and 14st, which I’m not.  When you’re in the public eye there’s pressure to look good, but you can’t be worrying about the cameras when you’re on the beach – that’s not a holiday. “I’ve always had chubby cheeks and when I put on weight, it goes to my face, neck and tummy.  My face goes a bit puffy.”

So after returning from Vegas, Sam went on a three-week detox diet, following the James Duigan Clean & Lean Diet.  It bans wheat, ready meals, unhealthy fats and refined sugar – and limits alcohol.  A typical daily diet for Sam began with a breakfast of porridge, followed by chicken salad for lunch and prawn stir-fry for dinner.  Snacks included sliced of ham or carrots with houmous.  Sam says:  “I ditched all the junk like crisps, and cut out heavy carbs such as bread and potatoes.  I didn’t totally stop drinking.  I’ve been out a couple of times, but I cut down and swapped wine for vodka, lime and soda.  “I missed eating bread rolls when we had a barbecue, but the diet wasn’t hard to follow because I could still eat lots of delicious healthy food.  If my boyfriend (co-star Joey Essex, 21) ordered in a Chinese I’d have a smaller portion of boiled rice, some noodles and a few prawns.”

Within three weeks of fast weight loss, Sam had flattened her tum and lost 5lbs, taking her to 9½st and a small size 10.  She says: “My stomach is less bloated and my face looks thinner and slimmer.  My thighs are also thinner and my skin is brighter and healthier.  “I’m really pleased with the results and I’m going to keep up the hard work.”

Sam also plans to work out with a personal trainer three times a week.  She says: “I love the way exercise makes me feel.  It gives me so much energy.”

Now Sam – who’s planning an autumn break to Ibiza with Joey and her sister Billie, 22 – still allows herself one or two vodka, lime and sodas when she goes out, as well as the odd chocolate digestive.  But she plans to relax her diet while in Ibiza.  “I won’t stress about having an ice cream or drinking a Malibu and coke,” she says.

And despite the on screen dramas, the reality star insists there’s no competition between the TOWIE girls when it comes to their figures.  She laughs: “We don’t really share diet tips – we’re more likely to share a bottle of wine! Everyone eats well, but we’re all different shapes.  Lucy is naturally slim while me, Lauren and Billie are curvier.”

Asked what Joey thinks of her new body, Sam says: “I don’t think he’s really noticed! He’s always telling me he loves me the way I am.  We’re really happy at the moment and have even been house hunting.

“Although I’m comfortable with my body around Joey, I always want to look good and I’ll wear nice clothes and make an effort when we go out.  The diet has given me much more confidence.”

Will you be following a detox diet on the run up to the party season?