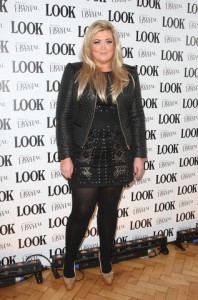 A very public battle with her weight has seen Gemma Collin’s figure yo-yo over the past few years from a size 20 to a size 14. In her latest attempt to lose weight, Gemma has turned to newly-svelte star Josie Gibson for help.

The TOWIE regular, who says she is addicted to food, first got in contact with Josie, 28, via private message on Twitter, congratulating her on her astonishing weight loss, going from a size 20 to a size 10 – before then asking the 2010 Big Brother winner for advice on how she herself could lose weight.

Gemma, who recently tweeted old pictures of herself when she was a size 10, started to gain weight seven years ago after splitting from her long-term boyfriend Dan and suffering a miscarriage just a few weeks later.

In 2011, she lost 3st, but piled it back on, saying, “I was miserable when I was smaller. I know I’m obese and it’s not doing me any good. I can’t say I only eat salad because clearly, I do overindulge.” But now she wants to lose weight again and is using Josie as her “thinspiraton”.

A source close to Gemma tells us, “Shes currently a size 20 and she’d like to slim to a size 14-16. Josie is helping keep her focused and motivated.”

Talking exclusively about teaming up with Gemma, Josie says, “She needs to stick with it – it’s better to do a few minutes every other day than loads once a week. And don’t worry about falling off the Wagon, just get back on it the next day.

I’ve told Gemma that it’s better to go for it full-out for 30 seconds at a time, than do something that is sort of doable for 30 minutes. “So, eight sets of exercising 30 seconds on and 30 seconds off will burn as much fat as 40 minutes of jogging. Just make sure that you work really hard during those 30 seconds” And heat has learned that Gemma is determined this time to stick to Josie’s workout regime. Our source adds, “Gem thinks Josie looks absolutely incredible and she was a size 20 to begin with, just like Gemma is now. As much as Gemma hates working out, she is really up for the challenge this time”

Where do you get your “thinspiraton” from?