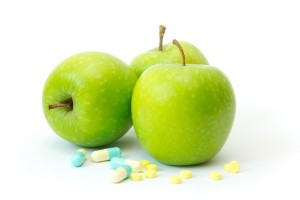 There is no event on the A-list calendar more prestigious than the Academy Awards. Therefore it goes without saying that there is no other event that requires more preparation to look your absolute best when it comes to sashaying down the red carpet. And as we know, the stars will go to any lengths to achieve this.

Last year, it was hooking up to an IV vitamin drip to lose weight and achieve an amazing glow. This year, however, in the run-up to the Oscars, it was all about a brand-new wonder pill – available at health stores and costing a mere £13.

Introducing the green coffee pill. Green coffee is the latest fat fighter in the US, after a major study found it contains a fat-burning antioxidant called chlorogenic acid, which speeds up your metabolism. So it was only a matter of time before Hollywood took note.

Now sources say the likes of Demi Moore, Katy Perry and J-Lo are all rumoured to be taking the completely legal pill. A Hollywood-based nutritionist told Grazia, ‘My clients have been going crazy for green bean coffee pills. They’re taking Tinseltown by storm.

In the run-up to the Oscars, actresses will do almost anything to look as slender as possible and they’re all fighting it out to have the best body on that red carpet.

As soon as this pill got a name for itself as being the new miracle weight loss tablet, word spread like wildfire among the Hollywood elite.

You are supposed to take 800mg a day but some are taking 1,600mg and insisting, “It can’t do any harm.” A source at the health store and celebrity hangout Earth Bar in West Hollywood told us, ‘Since awards season began, the pills have been flying off the shelves. We’ve seen four times the sales of them in the last month alone and have had to order huge quantities to keep up with demand.’

However, London-based nutritionist Romi Polichino doesn’t approve. ‘Women who are already slim shouldn’t be taking these pills,  in my view, more rigorous research needs to be carried out before we start putting them in our mouths. ‘Side effects can include anxiety, high blood pressure and IBS (irritable bowel syndrome), and people who have suffered from any of these things, or panic attacks and epilepsy, shouldn’t take them. The quality of these pills can vary, too- you can buy them cheaply online, but who knows what’s in them? I’ve heard that lots of them have fillers added to bulk them out. ‘A far healthier way to increase your metabolism is to exercise regularly and to eat several small meals throughout the day containing wholegrains, protein and good fat. This will streamline your body the natural way.’

Are you a fan of supplements to lose weight fast?