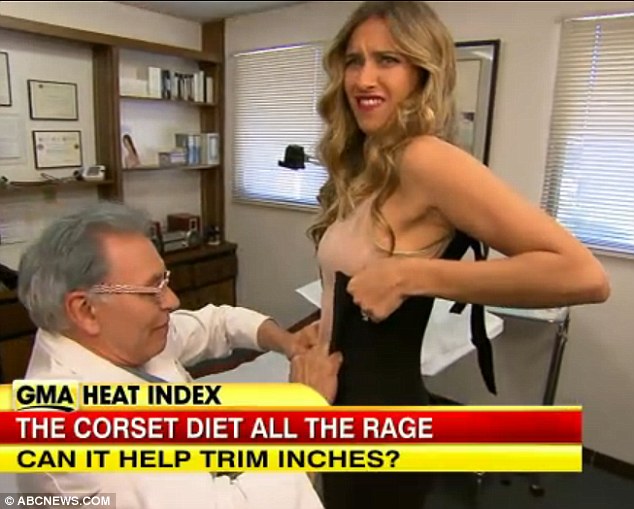 What if you could just put on a piece of clothing and lose weight? Sounds amazing, right? Well that’s the idea behind the corset diet, which has women wearing corsets for several hours a day to help them slim down. Using corsets as a slimming technique may be a relic from centuries past, but the constricting garments are making a comeback.

The idea is that wearing the corset, along with a healthy diet and exercising, can help ‘train your waist.’ But does it actually work?

Jessica Alba used the diet to lose weight after her two pregnancies – and since then, the number of women trying it has been on the rise. She admits, “I wore a double corset day and night for three months. It was sweaty, but worth it.”

Brooke Burke-Charvet is also a supporter of post-pregnancy shaping. “It works as a compression garment. It holds everything in place, so it is a great, great way to get back into shape.”

Several other celebrities, including Kourtney Kardashian, Gwyneth Paltrow, and Jennifer Garner, are all rumoured to have used abdominal binders of some kind to slip back into their skinnies.

Dr Alexander Sinclair from Beverly Hills has a number of patients who follow the corset diet. He claims some of his patients have lost six inches from their waistline by wearing the garment for three to five hours a day, before working their way up to 12 hours.

Not only does the tight corset ‘move the ribs’ and ‘constrict the stomach’ over time, but the discomfort caused by a tight corset compressing the bottom ribs can also make the wearer eat less. The extra layer and pressure will cause you to sweat too, leading to even more weight loss.

While some doctors are recommending the corset diet to their patients who want to lose weight, others are sceptical that it’s merely a trend that could in fact cause health problems later on in life.

Keri Peterson MD, a physician at Lenox Hill Hospital in New York City and a medical advisor for Women’s Health says “If anyone wearing a corset loses weight, it’s not actually because of the corset. It’s more likely because the contraption makes it so uncomfortable to eat that you automatically consume fewer calories.”