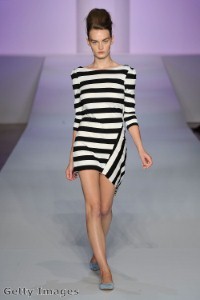 For years, fashion designers and clothes stores have claimed that wearing vertical stripes can make people look slimmer, and a new study has confirmed that they really do.

Research was carried out by Val Watham, a participant in Radio 4’s “So You Want to Be a Scientist?” hunt for the year’s best amateur scientist, who was assisted by 500 visitors to Edinburgh International Science Festival in April.

The participants were asked to rate people dressed in vertical and horizontal stripes on how tall or wide they looked, with the result being that those wearing vertical stripes appeared taller and slimmer, even when the same person was modelling each style.

Ms Watham said her aim was to put together real-life evidence of the slimming effect that vertical stripes can have, as previous research failed to do this.

“When I looked at the press coverage of the results, it was about artificial situation. They’d used line drawings just filled in with flat stripes, and it didn’t look like real people wearing real clothes,” she added.

Black remains the most popular shade of clothing for women hoping to look slimmer, the study found.

Have you tried wearing vertical stripes to look slimmer?