Staying up late can make you fat - Slimming Solutions

Staying up late can make you fat 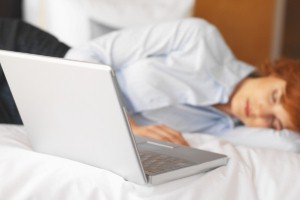 People hoping to lose weight in the weeks ahead have been advised not to eat late at night if they want to achieve their goals.

According to US researchers, people who stay up late to browse the internet and watch TV are munching on snacks that then sit on their stomach throughout the night without being digested properly.

Dr Satchidananda Panda, who led the study at the Salk Institute for Biological Studies in California, explained that the digestive organs are at their peak power during the day and are much better at converting food, whereas they begin to 'sleep' later on.

The study showed that people who eat later at night store 70 per cent more fat deposits from their food than those who eat three square meals a day.

"Every organ has a clock. Those metabolic cycles are critical. When mice or people eat throughout the day and night, it can throw off those normal metabolic cycles," he explained.

People with slimming goals should aim to eat during the day and refrain from snacking later on if they want to achieve their weight loss targets, the experts recommended.

Do you ever find yourself snacking at night?