Slimming after giving birth wasn’t a problem for Abbey Clancy 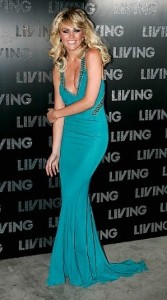 Anyone on the lookout for slimming inspiration after giving birth could try Abbey Clancy, who has been speaking about getting her figure back.

The 25-year-old told Closer magazine said she is sure she weighs less now than she did before she got pregnant with baby Sophia as a result of a busy lifestyle.

“I’ve just been running around after my baby and horse riding … I’m really happy with my figure. I’m lucky to be blessed with good genes,” she commented.

Clancy admitted that she has not been alone in looking after the baby when husband Peter Crouch is unavailable, as her mum has moved in to assist with duties such as nappy-changing.

This is sure to help her when she is on television presenting jobs, something she has said she loves too much to give up.

Actress Lucy Benjamin also recently told Closer she found slimming down after having children surprisingly easy, although she did start doing circuit training to help her.

Are you finding it easy or hard to get back in shape after giving birth?