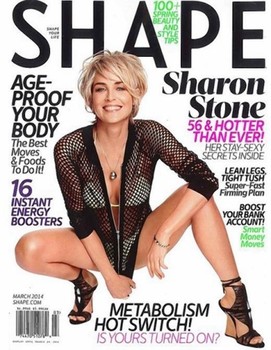 Sharon Stone – 56 years old and hotter than ever

While Sharon Stone has always given off a cool, strong air of self-confidence (and rightly so – look at her!), she admits that dealing with aging has been really rough.

“There was a point in my forties when I went into the bathroom with a bottle of wine, locked the door, and said, ‘I’m not coming out until I can totally accept the way that I look right now,’ “ Sharon Stone told Shape magazine this week.

Eventually she decided to just accept it and age gracefully rather than fight the process, and has never felt better. Sharon hopes society will expand its definition of beauty to include older women, and admits she has never had plastic surgery because she doesn’t want to look like a cookie-cutter blonde.

“This idea that being youthful is the only thing that’s beautiful or attractive simply isn’t true. I don’t want to be an ‘ageless beauty.’ I want to be a woman who is the best I can be at my age.”

Sharon Stone credits a low-sugar, low-carb diet and yoga workouts for her age-defying good looks at 56.

Sharon maintains her figure by following the low-carb GI (Glycemic Index) Diet. Her diet is heavy in red meat and vegetables, but avoids sugar and simple carbs. And it must be working well for her, as she has followed the GI Diet for over 10 years!

The 5’9 star also works out regularly, combining strength training, stretching, yoga, and dancing. Sharon has always has a great figure, but she admits that gaining 45lb during her twenties threw her into a serious depression.

However, she’s now happy to just be herself, and not give in to the pressure to look young. “I’m not trying to make myself look like a girl, because I’m not a girl anymore. I’m very happy about being a grown woman.”