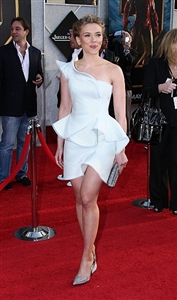 In order to achieve her stunning looks in her catsuit-based role in Iron Man 2, Scarlett Johansson has revealed that she surprisingly swerved the gym in favour of much different pursuits to keep lean and tidy.

The American actress, who is usually known for her sizeable feminine curves, explained prior to the film’s release that she was required to do a lot of stunts that required her to be consistently fit throughout the movie’s production, the Australian Daily Telegraph revealed.

Yet it wasn’t a case of weight loss via a heavy gym regime during the extensive filming alongside Mickey Rourke and Robert Downey Jr – instead, she simply went for yoga.

“I try to move my body every other day, in some way. I never jog and I’m not a major gym rat or anything,” she said.

Scarlett added: “I can’t stand going to the gym so I try to find alternative ways of exercise like yoga or hiking.”

Iron Man 2, the long-anticipated sequel to the blockbuster original, is released at the end of the month.

Do you think you could swap the gym for yoga like Scarlett?