Rise in obesity ‘has caused people to underestimate own weight problems’ 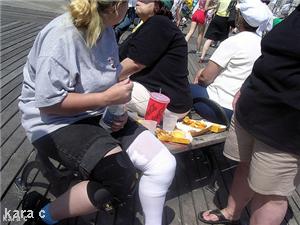 An increase in obesity levels has caused people to underestimate how bad their own weight problems are, a weight loss expert has claimed.

Jenny Caven, a spokeswoman for Slimming World, said that 27 per cent of people in the UK are obese, but just seven per cent think that their weight problem is severe enough for them to be classed as being in this category.

"This reflects a rapid rise in obesity, which has caused a blur in people's perception of what is a healthy weight, meaning ten million Britons are unaware they are obese and their health is at risk," she said.

Her comments follow the publication of research by the University of Texas in the journal Obstetrics and Gynaecology which found that weight misperception is common among both overweight and normal-weight women of reproductive age.

The researchers concluded that clinicians should provide patient-specific counselling on how they can lose weight and should take each patient's perceptions into consideration.

Did you realise that obesity was such a problem in the UK?