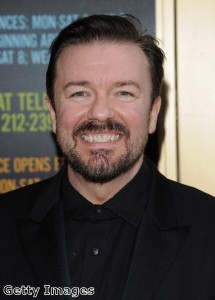 The funny-man told the Metro that he gets to bed early each night and exercises every day for 55 minutes.

“It’s a psychological thing. If it’s under an hour, you don’t feel it’s taking up a huge amount of your day and you can do other stuff,” he explained.

Gervais went on to say that, at his heaviest, he was 14 stone and “things were getting out of control”.

He suggested that a little bit of extra weight is not necessarily something that people should worry about, but he knew that, at 14 st, he was carrying too much.

The 49-year-old’s 6pm bedtime could also be helping him to shed those extra pounds, as researchers from Northwestern University in the US recently revealed that people who go to bed early eat fewer calories in the evening than those who head to bed late.

Could you fit 55 minutes of exercise into your daily routine?