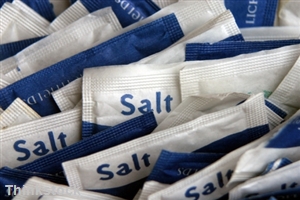 Many people reduce their salt intake when adopting a healthy diet in order to lose weight, but doing so can also reduce the risk of developing high blood pressure, a study has suggested.

Researchers from the University of California – San Francisco (UCSF) found that reducing salt levels in teenagers' diets by as little as half a teaspoon a day could reduce the number of young adults with high blood pressure by between 44 and 63 per cent.

This research was presented at the American Heart Association's Scientific Sessions 2010 meeting in Chicago.

Dr Kirsten Bibbins-Domingo, UCSF associate professor of medicine and epidemiology, said that individuals can find it hard to cut their salt intake because a lot of it is already present in processed foods and not added by the individual.

"Reducing the amount of salt that is already added to the food that we eat could mean that teenagers live many more years free of hypertension," she added.

Earlier this week, Judy Ledger, chief executive of the charity Baby Lifeline, stated that it is important for pregnant women to not eat too much salt.

Have you tried reducing the amount of salt in your diet?