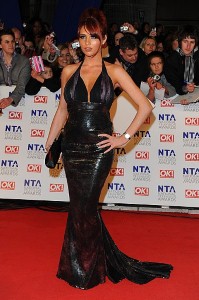 The Only Way is Essex personality showed off her significant weight loss as she arrived at the ITV studios in central London to present a fashion segment for This Morning.

Amy, who recently quit The Only Way is Essex, is thought to have gone down from nine stone to eight stone, nine pounds, in recent weeks.

The 21-year-old has been spotted near her home in Brentwood, Essex, going for early morning jogs in a bid to keep active and maintain her trim physique.

An industry source told Heat magazine: "There's a lot of rivalry between all of the girls, as they're all aware that whoever looks the best will get the most shoots. The girls all compare their bodies and it's now a race to look the best before the new series starts filming."

Model and TV personality Katie Price recently revealed on This Morning that she is currently on a no-carb diet in an effort to lose weight fast.