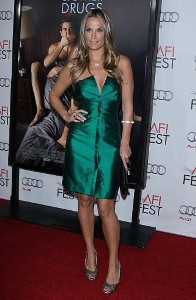 Pregnant model Molly Sims has revealed that she wears Spanx slimming underwear in an effort to control her newfound curves.

The cover girl is four months pregnant, and has moaned: “I have seen fat deposit in places that I have never seen!’

However, at the Safe House premiere in New York last night, Molly confessed that she has been using the popular underwear in a bid to contain her shape.

She said: “I’m wearing Spanx! They’re holding everything in!”

Despite being pregnant, the blonde beauty has not let her exercise regime slide, although she has eased up slightly.

She is a fan on the Tracy Anderson routine, but said she does not do it to her normal high level.

It appears that the control underwear is more than doing its job, as Molly looked stunning on the red carpet in a long red gown with pink detailing, which she teamed with a black blazer, hoop earings and bangles for a fun but sophisticated look.

Would you wear Spanx while pregnant?