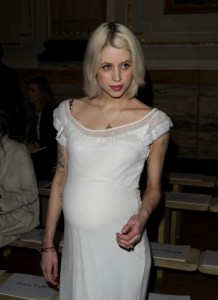 Friends and family worry after Peaches Geldof appeared painfully thin in the run up to her wedding.

Just days before her wedding, new mum Peaches Geldof was pictured looking alarmingly skinny at her London hen do.  And as she shunned the sweet treats on her big night out, there was concern the super slim bride had taken her pre wedding weight loss too far.  Peaches who gave birth to her first child, son Astala, in April, planned to marry rocker beau Thomas Cohen in a traditional affair at her father Sir Bob Geldof’s lavish 12th century Kent Mansion.  Her second wedding was a stark contrast to her 2008 late night Vegas nuptials to musician Max Drummney who she divorced in 2011.  But pals are worried as the 5ft 5 star, who remained slim throughout her pregnancy, has dropped a dress size to a size 6 in the past few weeks. A source says; “Peaches is skinnier than ever.   She doesn’t exercise, so she controls her weight loss through her diet.  On her hen do, she was quite picky and only seemed to eat sashimi with edamame beans and a miso soup.  Her portions were tiny.  Pals hope with the wedding out of the way, she’ll relax her diet, but she been looking exhausted lately.”

Diet expert Nicky Waterman tells closer: “Peaches looks to have gone from a size 12-14 at her heaviest in 2010 to a size 6 now.  I would say she weighs around 8st 2lbs.  I wouldn’t recommend she loses more weight.”

It was believed that the star was having eight bridesmaids, including her three sisters, Fifi Trixibelle, 28, Pixie, 21 and Tiger Lily, 16,

Peaches announced her engagement to tom in December then, gushing in January, said: “it will be quite a traditional wedding.  We want our son to know he has a mummy and daddy who will be together forever.”

The domestic bliss marks a new chapter for the former wild child – who was caught buying drugs in 2008.  And pals say that now she’s married, Peaches is hoping for more children with Tom.  A source reveals: “She says her and Tom are forever and she wants more babies.  She loves being a mum.”