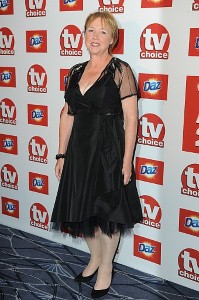 Former Emmerdale and Birds of A Feather actress Pauline Quirke has shed light on how she shed the pounds after ballooning to 20 stone.

The 52-year-old has been on an intensive weight loss regimen since tipping the scales at 280 lbs and said the reason for her size was very simple – she used to eat far too much.

In her new autobiography Where Have I Gone?, serialised in the Daily Mirror, Quirke reveals how it came to a head when her weight began having a major impact on her overall health, not just her appearance.

“I’d had a disc removed in 1991, I had diabetes in 1994 when I was pregnant with my son Charlie and had to have a hip replacement in 2009. Then I had a fall and fractured an ankle that wouldn’t heal properly,” she revealed.

When she then had to ask for seatbelt extension on a flight to Malaga in the summer of 2010 with her husband, she new enough was enough and embarked on the regime which has seen her lose eight stone – and counting.

The star revealed that the key to keeping the weight off is to resist the urge to eat food for the sake of it and to combine a good diet with plenty of exercise – neither of which she was doing before.