It’s estimated that around 50% of Britain’s healthcare workers are either overweight or obese. 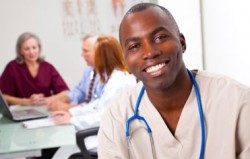 Due to these shocking statistics, the NHS is offering free slimming classes to all of their staff, in an attempt to “practise what we preach”. If this programme is successful, it could cover around 700,000 workers.

Along with offering slimming classes to staff, they are also offering cookery classes, nutrition advice and also exercise classes to overweight families. In the past North Tyneside Council started a programme called Weight Worries. Weight Worries was a free 12 week weight loss programme for staff working for the council.

According to the Daily Telegraphs report, Simon Stevens, the Chief Executive of the NHS, was expected to layout plans to try and encourage staff to get in shape in a speech on Monday.

He’s expected to say “For over a decade we’ve known that obesity prevention cuts diabetes and saves lives,” “If these results were from a pill we’d doubtless be popping it, but instead this programme succeeds by supporting people to lose weight, exercise and eat better.”

The scheme is in early stages, and the NHS is carrying out a trial involving 1000s of staff. They will be offered free Slimming World classes, as well as advice from dieticians and physiologists.

The UK has recently been named the second fattest country in Europe. Mr Stevens believes with the introduction of this program, the NHS will effectively tackle the obesity crisis.

Looking to slim down as well? Try our VLCD range! Less than 800 calories a day whilst still providing with all of your RDA of vitamins, minerals, and micro-nutrients.

How do you feel about this? Will it work? Get involved in the comments or using the hashtag #SlimmingSolutions on Twitter!