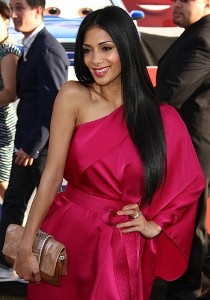 Although she used to obsess over counting calories to lose weight in the past, Nicole Scherzinger has revealed she adopts a much healthier approach now.

The singer told Shape magazine she exercises regularly and eats good, nutritious foods instead of standing on the scales all the time.

"My new motto is – stay active, keep everything in moderation and stop being so tough on yourself," she remarked.

Despite her often "crazy" schedule, Scherzinger insisted she never skips meals and instead eats plenty of boiled eggs and toast for breakfast, vegetables at lunchtime and chicken or fish with rice or more vegetables at dinner.

And if she does pack on a few extra pounds through splurging, the former Pussycat Doll manages to lose weight fast be doing plenty of dancing in her music videos.

Earlier in 2011, Wizard Jeans named Scherzinger the most beautiful woman in the world following a poll.