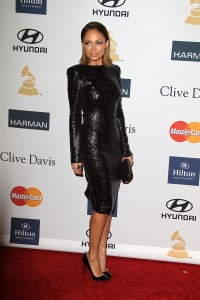 It looks like Nicole Richie’s weight loss issues could be back with a vengeance as she was spotted looking scarily thin at a recent awards ceremony in the US recently.

Nicole Richie is no stranger to being skinny, but in recent years she’s seemed to get her fluctuation weight under control.

However, her appearance at the CFDA Fashion Awards in NYC has sparked fresh fears.  Recent photo’s of Nicole 31 have prompted fans to make comments online including “Gross.  Stop restricting food.  You look awful” and “This is not a good look…Eat something before you die!”

The tiny star has made no secret of her weight battles in the past admitting in 2006 that “I know I’m too thin”.  Back then, her own medical teams characterized her weight as being “in the realm of anorexia”,  but the mum of two subsequently regained a much healthier shape.

Sadly it appears that Nicole’s role as a mentor on US Reality show Fashion Star has fired up her old slimming obsessions.  She’s dropped 6lbs in the last month and now weighs just 7st.  A source tells us “when she got the job, she was determined to look amazing and called on Tracey Anderson to help.”

Fitness expert Tracy is also known for her strict exercise regimes which celebs like Gwyneth Paltrow and Victoria Beckham swear by.  In recent months, Nicole has been seen at Tracy’s Hollywood studio four or five times a week.

Our source continues, “She loves feeling skinnier than everyone else.  For Nicole, there’s a thin line between looking great in designer clothes and taking things too far.”

Would you slim to such extremes?