Nearly half of women ‘hide snacks’ 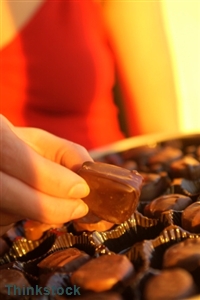 Nearly half of women hide sweet treats from their friends and family, a study has found.

Research conducted by Canendrel suggests that women are a lot greedier than men, as just quarter of males surveyed said that they hide snacks.

A third of women said that they indulge their sweet tooth in secret when no one else is around, so that they do not have to share.

Some of the oddest places people admitted to hiding their treats include under pillows, down the side of seat cushions, hidden in bookshelves, in potato bags, in the cellar, in the wardrobe and even in the garage.

When it comes to the reasons why women turn to sweet snacks, the reasons vary from tiredness and sheer boredom to feeling low following the break-up of a relationship.

Earlier in the year, Icelandic product designer Hafsteinn Juliusson launched a zero-fat snack that gives dieters something to chew on without causing them to pile on the pounds.

Called Slim Chips, the snacks are made from nothing but edible paper and a bit of colouring and flavouring,

How do you halt your sugar cravings?