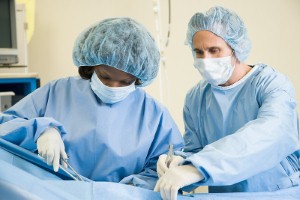 More and more men are looking for quick weight loss solutions, it would seem, with males increasingly opting for tummy tucks.

A new report revealed that male plastic surgery now accounts for ten per cent of all cosmetic procedures, while the tummy tuck has seen a 15 per cent rise in popularity.

Furthermore, it appears that many men are eager to eliminate their ‘man boobs’, with gynaecomastia being the second most popular procedure for males, rising by seven per cent, according to figures from the British Association of Aesthetic Plastic Surgeons.

Male liposuction has also increased in popularity, with an eight per cent rise, alongside nose jobs, eyelid surgery, ear correction and face and brow lifts.

Despite the economic downturn hitting Brits’ finances hard, the number of people having the surgery saw a hike, with popularity of such procedures rising by six per cent overall.

Would you ever consider going under the knife?