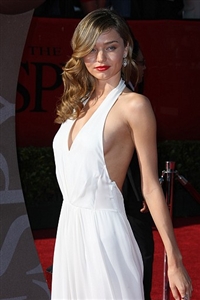 Miranda Kerr has revealed that she maintains her svelte figure by practicing yoga.

The Victoria’s Secret model, who is currently dating Hollywood hottie Orlando Bloom, told HollywoodLife.com that she would still take care of her body even if she had a job that did not rely on it.

“It’s something that I’ve always believed in growing up. Taking care of my mind, body and soul is very important,” she said.

She went on to suggest that, when she was growing up, her and her family always ate organic vegetables.

The Australian stunner went on to say that she practiced yoga and that it was “very good” for her.

Another celebrity that uses yoga to keep in shape is Madonna, but the queen of pop was turned down as a client by famous guru Bikram Choudhury.

He refused to give Madonna private lessons, saying that if she wanted him as a teacher she would have to attend his group classes and leave her ego at the door.

Do you think yoga could complement your weight loss plans?