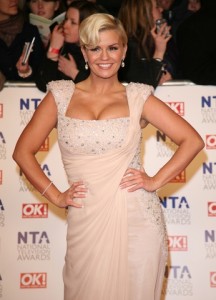 Despite pals’ concerns about their romance, Kerry Katona plans to kick start her weight loss with new man George Kay.

After spending nights in on the sofa loved-up with her new man, serial yo-yo dieter Kerry has gained a stone.

And pals reveal the star is now nervous about how she’ll look for the upcoming Atomic Kitten reunion.

She’s hoping working out with the ex-rugby player, who’s a fitness fan, will help with her slimming efforts.  A source says: “Kerry is nearer 10st again.  Her training and juice diets fell by the wayside after being out all the time doing book signings lately.  And she slipped back in to her old habits of eating junk food and takeaways.

“George is in really good shape and loves the gym, so she wants to get fit again for him as well as the Kitten reunion.”

Kerry, 32 – who’s 5 ft 3 and has yo-yoed between a size 6 and 16 over the years – has tried everything from hypnotherapy to juicing retreats and numerous stints in boot camp to tackle her body issues.  She spent 8,500 on lip and a tummy tuck in May last year, taking her to a size 8 and 8st/  but the weight has since crept back on and the star told closer before Christmas she was planning to eat what she wanted over the festive period before getting back on the wagon.

And sources say Kerry’s worried her band mates Liz McClarnon and Natasha Hamilton will upstage her on ITV2’s Te Big Reunion this month.  A pal says: “Kerry fears she’ll look a mess next to the girls.  But she’s trying not to let it get to her, she’ll probably kick start the regime again with another boot camp.  George says he loves Kerry regardless, but she can’t help but feel self conscious.  He’s very buff she says he’s the fittest man she’s ever been with.”