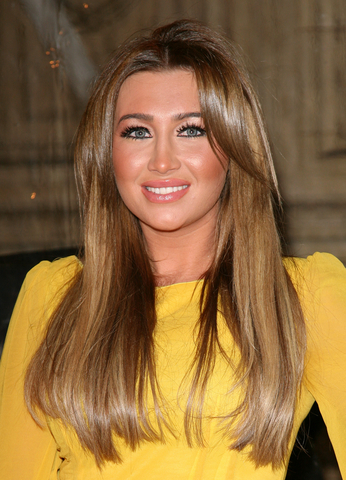 After losing nearly a stone, Lauren Goodger feels triumphant after flaunting her incredible new body in front of her ex, Mark Wright.

Lauren’s weight loss has been achieved by embarking on a juice detox and overhauling her lifestyle.

Showing off her incredible new figure in a purple clingy dress last week, she attended the same event as former childhood sweetheart and ex fiancé Mark Wright – and delightedly told pals: “I feel amazing – I am completely over him”.

The pair spilt in August last year after being on and off for 10 years and had last seen each other at a club in June, before bumping into each other last week.

“Lauren was nervous about seeing him but, when she did, she realized she’d finally moved on”, a source revealed.

“She joked that, in the past, she’d seen him looking over and sucked in her belly, but she feels incredible right now. The weight loss has given her a huge confidence boost and she was telling friends she couldn’t believe she felt nothing for Mark when she saw him”.

The source adds: “Mark couldn’t take his eyes off Lauren when he saw her. Being obsessed with gym himself, he was really impressed she’d stuck to her diet and exercise regime. He thought she looked really fit”.

26-year-old Lauren revealed last week that she’d lost 9lbs in just four days at a retreat in Majorca where she exercised alongside being on a juice and smoothie only diet.

Lauren who’s almost back to a size 10 by revamping her diet and losing a further 3lbs, is determined to be a size 8 by Christmas. She also reckons she could hit her target within a matter of weeks if she continues with her new sensible weight loss plan.

A source says: “Lauren’s amazed that she’s managing to continue eating healthily and is buzzing from all the compliments she’s getting. She’s even been buying size 8 dresses because she’s sure she’ll be showing off her new shape in weeks”

The 5ft 6 former TOWIE star has famous for her yo-yo dieting weighed her heaviest in March, dropped nearly 2 stone with a diet plan and boot-camp stint in June, then went back up to 10 ½ stone and a size 12 before her recent retreat.

Her healthy meals which she is now sticking to include scrambled eggs for breakfast and grilled fish and vegetables for dinner. She recently tweeted, “Just made myself tuna salad…Starving! #healthy even can eat salads in winter good 4 u”.

A source says, “She’s planning to step it up in the next few weeks to reach her goal. She’s already doing yoga four times a week and even went the morning after her night out. Plus, she’d normally knock back booze at these events, but she’s totally cut back. She’s snacking on edamame beans and has cut out carbs and fizzy drinks – and she had no red meat last week. She’s planning to stick to juice this week and lose another 3lbs”.

How are you planning to shed the pounds by christmas?