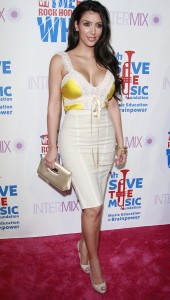 Since dating rapper Kanye West, Kim Kardashian has shed a total of 10lbs with a diet overhaul and “caveman-style” workouts!

The 31-year-olds weight loss has been due to hour-long classes at Barry’s Bootcamp in LA, which involves interval training, plus cardiovascular and strength work using free weights.

The class’ caveman nickname comes from its four to eight minute treadmill intervals, which mimic the short bursts of running that prehistoric humans did – this boosts the rate at which fat in burned.

Now a slim size 8, 5ft 1 Kim has also been working out with celebrity trainer Gunnar Peterson, the man responsible for getting her into shape for her short lived wedding to Kris Humphries in 2011.

Kim overhauled her diet after gaining 10lbs last year, cutting out gluten, dairy and sugar. “No more sitting at home, eating too much”, she explained at the time.

Her typical diet now consists of an egg-white omelette for breakfast, salmon and salad for lunch and chicken, brown rice and vegetables for dinner.

Are you in need of a diet overhaul?