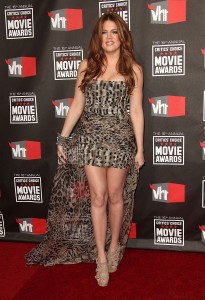 Khloe Kardashian who opened up last month about her struggle to fall pregnant with husband Lamar Odom, has previously turned to food as a way to deal with problems in her life.

“I’m just an emotional eater. When I go through something, I gain weight”, Khloe explained.

The 28-year-old started training four hours a day with her basketball star husband in a bid to lose weight and lost 1st 6lbs in just 3 months.

Going from 12 ½ stone and a size 14 to 11st 1lb and a slim size 10, trainer Robbie Davies who’s been working out with the couple revealed that Khloe’s workouts include going for canyon runs as well as stair-running, Pilates and boxing three days a week.

“She trains like an athlete when she is with us, even doing weight training”, he says.

Recently unveiled as the new X Factor USA presenter, Khloe adds, “We’ll do indoor and outdoor workouts. We switch it up, so it’s fun”.

It’s also been reported that Khloe has hired a chef to cut out sugary snacks. She says, “I try not to eat any white carbs. I still eat carbs, but just the good carbs”.