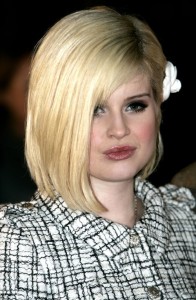 She’s yo-yoed plenty in the past, but now Kelly Osbourne’s finally managing to keep the weight off – thanks to the colour of her plates. Yes, Really!
The 27-year-old’s following the plate diet, which is based on studies that show people eat up to 20 percent more when they use a plate that’s the same colour as their food, compared to when they use a plate of a contrasting colour.

Kelly was first introduced to the plan by a colleague on her TV show the fashion police.It’s helped the 5ft 2in star – who once was a size 16 – to lose weight & slim down to a size 6 – 8. A source says: ‘Five months after Kelly started the plan the results are there for all to see. She thinks it’s amazing – she takes the plates everywhere. Unlike other fads, Kelly says this diet really does help you lose weight and keep it off.’

It’s all to do with the power of illusion. It’s though a high contrast between the colour of a plate and that of common foods, such as rice or pasta, serves to make you look at the size of your portion and think again.

This isn’t the first time Kelly’s shed a lot of weight. She lost 3st to get down to 8st 6lb after appearing on Dancing With The Stars in 2009. At that time, she achieved her skinny look by following the bar method, a punishing mix of Pilates and ballet. Kelly did three 60-minute workout sessions a week.Although this got results, it wasn’t sustainable.
Speaking about her weight loss last month, she said: ‘I don’t want to be anorexic. I’m happy with how I look. As long as I’m healthy and eat right, that works for me.’

Have you ever followed any unusually diet plans?