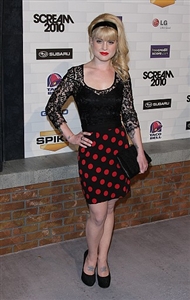 Kelly Osborne has revealed how deeply affected she was by being ridiculed about her weight.

The TV personality told Shape magazine that she was constantly called fat and ugly by the press when she was growing up.

“I understand that being judged by others comes with the territory, but it broke my heart and ruined my self-esteem,” she said.

The 26-year old has lost around 3st 7lbs since last year, over a stone of which she shed while training for hit US TV show Dancing With the Stars.

She said that it was her dancing partner Louis van Amstel who taught her how to eat well.

Kelly told the magazine that she is not a fan of the gym, so to make it more enjoyable she would work out in cute outfits.

She says that she now stays motivated by making her friends join her for fitness classes.

Another celebrity who recently achieved dramatic weight loss was Emmerdale actress Suzanne Shaw, who told Closer magazine that she had shed 11lbs in just six weeks.

Does Kelly’s success make you more motivated to lose weight?