Kelly O: “If you want to eat cake then eat cake!” - Slimming Solutions

Kelly O: “If you want to eat cake then eat cake!” 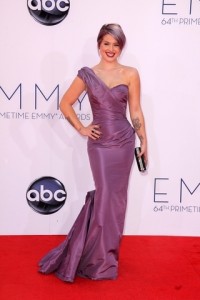 After losing 4st 7lb slowly and sensibly over two years, Kelly Osbourne looked incredible at the recent Emmy Awards in a floor-length Zac Posen gown. So good, in fact, that we had to know her secret. Was it down to a no-carb diet? Was it eating only purple foods? Getting her jaw wired shut?

In a nutshell: no. Kelly, who currently weighs 7st 7lb, explained, “There is only one way to lose weight.  It’s the boring way. You work out. It sucks.” We hear you Kel. “There’s no such thing as a quick fix,” she continued “There’s no such thing as a diet.  All you can do is make small life changes. And do not deny yourself anything. If you want cake, then eat cake – just don’t eat the whole thing.” Kelly, 27, has struggled with her weight ever since her 2002 TV debt on Reality show The Osbourne’s, when she weighed around 11st 7lb, and she admitted she found it difficult back then to cope with her new found fame, developing an addiction to painkillers. She told us “I know that I’m obnoxious. I know I’ve got a big mouth. I know it’s a blessing and a curse to be opinionated. I’m just the way I am, I can’t help it. I spent half of my life fighting that.” My advice to other girls would be, just be who you are,”

Kelly isn’t totally over her body issues, though. When asked if there was any part of her body that she was self-conscious about she replied “Oh my God, absolutely!” grabbing some flesh on her leg. “This bit – it’s, like, my upper thigh. I’d like it so my legs were straight there, instead of all fleshy. Also, I’ve got legs like an American football player. I’ve got muscles. Men stop me on the street and say ‘Oh my god, you’ve got incredible legs,’ and I’m like, ‘What are you talking about?’ And then I started to realise that men like muscular legs. I was like, ‘Oh, that’s weird.’ But I don’t complain about my body: either you like me or you don’t. “At this point, I can’t change who I am.”

Are you happy with your body shape?