Katherine Jenkins sheds weight on Dancing with the Stars 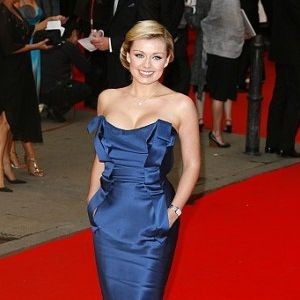 Opera singer Katherine Jenkins has revealed that she has lost one and half stone while competing in the US TV series Dancing with the Stars, the equivalent of the UK's Strictly Come Dancing.

Since the show started she has dazzled the judges – who include Strictly's Len Goodman and Bruno Tonioli – and topped the leaderboard for the first three weeks, before finally struggling with the pasodoble last weekend.

It seems that all the hard work put into practicing and rehearsing has also helped her to trim down, with the 31-year-old telling the Daily Mail that she has so far lost 21 lbs – though she will not take it further than that.

"I'm burning so much energy now that it's hard to put the weight back on. But I like to be curvy so I'm trying not to lose any more. I do want to be healthy, too – there are so many skimpy costumes to wear," she added.

Jenkins recently told the Daily Mail that she has been following the Dukan diet favoured by celebrities including Jennifer Lopez and the Middletons, though she has tweaked it to provide more nutrients.

She revealed: "I do follow a version of the Dukan diet, but I don't follow it to the extreme so a lot of fish and vegetables. If I want chocolate, I'll let myself have a bit of chocolate in moderation."

The singing superstar also noted that a combination of jogging and Bikram yoga has also enabled her to stay trim, on tour, when there is not always a gym nearby.

Have you tried dancing as a way of losing weight?