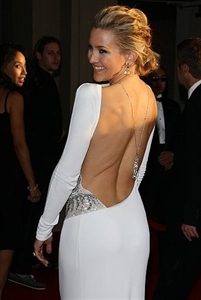 Speaking to the Daily Star, the actress hailed the raunchy workouts for her curvy-yet-toned figure.

Kate said that she was unsure about the idea at first, but that her dancer friend persuaded her to give it a go.

"So we went to this pole-dancing class and that was it. I was hooked," the 29-year-old told the newspaper.

She went on to say that the exercise has changed her body "drastically" and that she has never been stronger.

The star mentioned that, before her career as an actress kicked off, she was a keen footballer.

As well as pole dancing, Kate said she stays slim by canoeing, hiking, scuba-diving and cycling along with eating a diet that is low in carbohydrates but high in protein.

Last month, researchers from the Harvard School of Public Health revealed that cycling and brisk walks are particularly good at preventing weight gain in pre-menopausal women who are overweight and obese.

Have you ever considered giving pole dancing a go?