Jenny Frost ‘After twins, I’ve had to fight to get my body back’ - Slimming Solutions

Jenny Frost ‘After twins, I’ve had to fight to get my body back’ 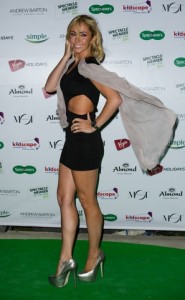 Jenny Frost is in incredible shape after the birth of her twin girls – but she insists it’s been hard work all the way!

Looking slender, toned and without a stretch mark in sight, it’s hard to believe Jenny Frost gave birth to twins at the end of January.

The singer has a sensational bikini body just months after the Caesarean birth of daughters Nico and Blake.

But the 35 year old TV presenter admits she’s had to battle to get her body back in shape and lose weight for the summer.  Jenny, who’s also mum to Caspar, five, says: “It’s a game changer with twins – I snapped back into shape with my first pregnancy.  I’ve never worked out for my figure – I hate exercise – but, for the first time in my life I had to fight to get back in shape.

Jenny who’s 5 ft 8 was 12st 8lbs at the end of her pregnancy, but had dropped to 9st 8lbs by may, partly thanks to breastfeeding for six weeks.  To tone up and get back to her usual weight of 9st 2lbs, she started an intense three-week regime.  And after slimming by 6lbs on the health kick, she’s feeling more confident than ever.  Jenny explains: “I wanted to be bikini ready for the summer.  My trainer asked me about the exercise I’d done in the past and I said nothing, so I had to start from scratch.  I’m lucky as I’ve inherited great muscle tone from my parents, but exercising is tough and I can’t say I enjoy it.”

“I’ve done an hour long session every day, except Sundays, for three weeks and I’ve been doing core workouts and circuit training.  We run on the spot, do press-ups, pull ups, sit ups and squats.  My stomach is still tender from the Caesarean though, so I can’t do everything.”

Jenny has also adopted a healthy diet.   She says:  “I’ve cut out all main carbs, like pasta and potatoes.  Breakfast is fresh fruit and I have Gazpacho (blended tomatoes, peppers, olive oil, onions and garlic) or almonds for a snack.  Lunch is chicken or salmon salad and, for dinner, I’ll have steak or fish with veg.”

The twins have certainly changed my body for the better.  I’ll never stop drinking wine and eating cheese – so exercise for me is purely to allow the naughty things in life to continue!