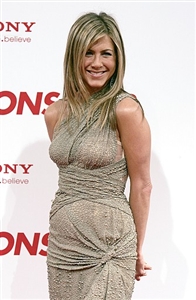 Jennifer Aniston is the latest celebrity to convert to the increasingly popular baby food diet.

The ex-Friends actress is working with personal trainer Tracy Anderson, who devised the diet, in an attempt to lose weight quickly.

Jen has reportedly lost half a stone already by sticking to the eating regime, which allows 14 portions of pureed food to be consumed a day, as well as one healthy non-pureed meal.

Speaking to Hollyscoop.com, Ms Anderson said: “I developed a cleanse where you can still eat and it’s a lot of puree foods. I was very careful about the foods I chose to put in it.”

Earlier this week, it was reported that Lady Gaga had also embarked on the baby food diet, but friends told Hat magazine that they were worried about the Pokerface singer.

The magazine claimed that the diet was affecting the star’s ability to perform her physically demanding dance routines.

Would you try the baby food diet to get a body like Jen’s?