Jane Seymour’s bikini body at 62: Her diet and workout secrets 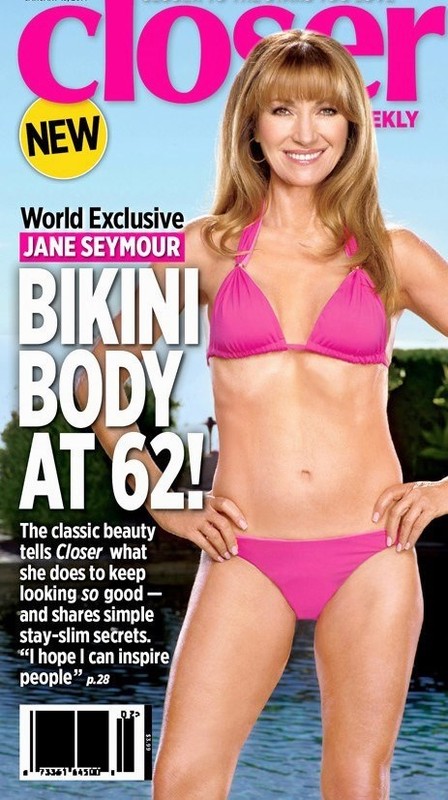 Jane Seymour has barely aged over the past 30 years, thanks to a sensible diet and regular workouts that combine cardio exercise with strength-training, she told US magazine Closer Weekly in an exclusive interview last week.

“I’m in better shape now in some ways than I was when I was doing the ‘Bond’ film [in 1973],” said Seymour, who showed off her bikini body on the cover of Closer. “I hope I can inspire people!”

5’3″ Jane maintains her sleek 115lb (just over 8 stone) physique by eating small portions and working out for an hour three times a week, doing spinning, strength-training and Gyrotonics, a machine-based method that blends stretching and strengthening exercises.

But mum of five Jane doesn’t believe in deprivation or extreme diets.

“I don’t do major fasts or work out crazily every day… No diets here. I hate to deny myself things. If I have pasta, I’ll just eat half of it.”

Jane, who’s now a grandmother, also does push-ups, plays golf, tennis, swims, and power-walks. Her healthy lifestyle is motivated more by a desire to be healthy than to look good. “I just want to be as healthy as I can be for as long as I can.”

Seymour said her anti-aging beauty secrets include drinking lots of water, getting plenty of sleep and avoiding the sun. And although she’s previously admitted getting an eye lift and breast implants, Jane isn’t rushing to get more plastic surgery, and is opposed to Botox.

“I tried it and hated it,” she said. “I’d never do it again. I’m an actor and I need to be able to move every part of my face. I think I’m being hired a lot because I haven’t done all the stuff everyone else is doing.”

While getting older can be difficult, Seymour said she’s happier than ever because of her excellent health. “The best thing about being 62 is being alive and healthy!” she said.