Is your child going without Breakfast? - Slimming Solutions

Is your child going without Breakfast? 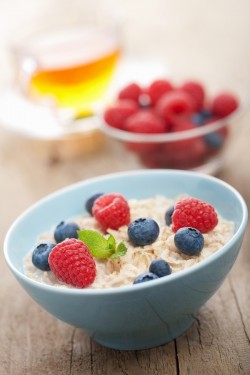 Approximately 25% of teachers in England and Wales have seen an increase in children turning up to school hungry.  Claiming that 2.4% pupils turn up in class at least once a week having had no breakfast.  Some of them have not had breakfast on any given day.  One child of 9 said he thinks of how much his belly hurts more than learning.  He’d probably not eaten anything since school dinner the day before.  This may also be the only hot meal on school days for 1 in 4 children.  A hungry child will probably be restless, unhappy, lethargic, distracted, disruptive and definitely not thinking about learning.  Teachers are constantly catching pupils falling asleep.  Children of both Primary and secondary schools who turn up hungry will typically lose one hour of learning time that day due to loss of concentration.  If hungry even once a week = over a school year this would add up to 36 hours.  Over the entire primary school life (5-11yrs old) = 8.4 weeks of school or putting it into perspective = 70% of one term.  Teachers say that the impact of hunger on lost learning hours increases as children reach secondary school.  It also puts increased demand on a teachers’ time.  Some teachers admitted buying a few staple foods to feed pupils who attend school without breakfast.

About 12% of 2,000 parents surveyed said they don’t have the time to offer their children breakfast.  36% say children won’t eat it anyway.  But by far the largest group, a massive 52% say they simply haven’t the budget of the previous year to spend on food.

Children who eat a healthy breakfast before starting the school day achieve higher academic results.  Eating an all-round breakfast of dairy, cereal, fruit and bread.  Children age 11 who ate breakfast achieved nearly twice as much as pupils who didn’t.   One in 5 children reported eating sweets and crisps for breakfast or even cereal the evening before.  This did not have a positive impact on their education.

Almost half of the schools in the UK already provide breakfast clubs for pupils, particularly in areas of deprivation.  Ensuring that those most in need benefit from this.   This may boost the educational performance of pupils.

Kellogg’s, used the findings of various surveys and studies to increase the network of school breakfast clubs.   New breakfast clubs receive money in for form of a cheque, grant, food vouchers and a training pack.  100 breakfast clubs per year have been set up in the last 10 years.  That is more than 2,000,000 breakfasts a year.

Children from disorganised homes with lack of routine are more likely to be rude or antisocial.  Chaos is no more common in low-income families than it is in well off ones.   It is the way parents relate to their children that makes the difference.  Parents who were also raised in chaotic homes are significantly less responsive to their own offspring.  They tend to feel less confident about controlling their child’s behaviour, are usually less involved in their child’s life, less consistent in how they discipline and for what for the discipline is for, less vocally stimulating, holding them back with their attempts at exploration, constantly saying ‘you can’t hear yourself think in this house,’ and they tend not to monitor their children’s activities enough.  There is also less parental warmth and enjoyment, and more anger and hostility.  Using more physical punishment.  No amount of hugs and loving things will compensate if the house is dirty, messy, if the child has no idea when or if he/she will be getting anything to eat, or where their school clothes are.  The children with most difficulties and higher level of chaos.  Came from homes with two negative parents.  A large impact in the home is that of the father’s role.  This is as much or is more important than mothers.  If a father is cold, miserable and critical the home is usually highly chaotic.  Mothers tend to spend more time with children and perform more household chores.  So their relationship with the children would probably be more significant than their father.  An organised home doesn’t eliminate problem behaviour children where the parenting is negative.  A lot of mothers with small children feel overstretched.  If fathers would take up the slack and engage with the family.  They could reduce the chaos and increase the amount of warmth and fun.  Some parents aren’t sure whether to do housework or give their child quality time?  Is a clean house more important than a happy child?  A measure of domestic order is the best idea, but it doesn’t make up for joyless parenting.  Making sure your house is germ free and regimented is simply not enough.  Countless studies have proved that children need boundaries.  But what is the right balance between a warm, loving home and a tidy, organised one?  Children need something positive in their life, perhaps a little praise now and then.  A little bit of positivity instead of constantly nagging, shouting, calling and worse.

Siobhan Freegard, founder of the website Netmums, said: “A combination of parental apathy and poverty is leading to this increased problem of more children than ever going to school hungry.  At every turn, from school teachers to parents in the playground, we are hearing more and more reports of kids hungry at school.  “A toxic combination of growing poverty, the rising cost of living and troubled families with chaotic parenting, means innocent children are being denied the best start to the day, and to their lives. This is unacceptable in modern Britain and must be tackled now.”