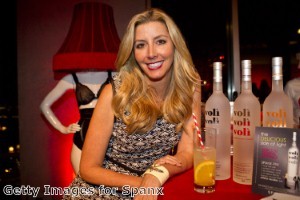 Spanx founder Sara Blakley has explained the thoughts which led to the development of the well-loved slimming undergarment.

The 41-year-old disclosed details of her popular brand as she appeared on the cover of the Forbes’ Billionaires issue.

Ms Blakley acknowledged that the idea for Spanx stemmed from her desire to find a gap in the market, a strategy which led to her becoming the youngest self-made woman to make the Forbes’ Billionaires list.

Commenting to the publication, the fashionista noted: “I’d never worked in fashion or retail. I just needed an undergarment that didn’t exist.”

The undergarments have since garnered plenty of support in the fashion industry, including from current chief executive of Neiman Marcus, Karen Katz.

“Sara’s effort was to solve an age-old problem for women in a modern way. We were smitten from the beginning,” she explained.

Spanx has gone from the drawing board to being sold in 35 countries across the world, with the product range covering more than 200 variations including bras, swimsuits and men’s undershirts.

Have you got some Spanx products in your wardrobe? Check out our full range.