How sleeping in total darkness could help you lose weight 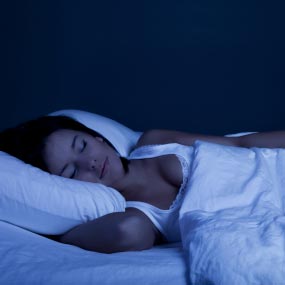 IPads, televisions and computers in bedrooms may be fuelling the obesity epidemic because rooms are not dark enough for metabolism to fully kick in, scientists claim.

A new study suggests that when sleeping you need pitch black conditions for the body to produce a healthy level of hormones and regulate the conversion food and drink into energy.

But ambient light from screens, or the street light which creeps under curtains or blinds, can harm the production of melatonin and stop the body processing food as efficiently.

Scientists at the University of Granada discovered that injections of melatonin helped fight obesity and diabetes in rats by regulating their systems.

They believe recreating similar levels of the hormone though sleeping in the dark would have a similar impact in humans.

“Melatonin is a natural substance present in plants, animals and humans,” said Prof Ahmad Agil. “It works as a hormonal signal released during the night to establish circadian rhythms.

“Currently this process is frequently interrupted as a result of excessive exposure to artificial lightning during the night. For instance, many people are in the habit of sleeping with their lamps, TVs or their computers switched on, or with the blinds drawn up.

“For all these reasons, it is important to try to sleep in absolute darkness, to avoid interference in the generation of melatonin.”

Prof Agil believes that the obesity epidemic is being fuelled jointly by sedentary lifestyles, increasing consumption of foods high in calories and excessive exposure to artificial lighting which is reducing melatonin levels.

He thinks that keeping the lights on for a long time after it gets dark could be disrupting the body’s natural circadian rhythm and harming metabolism.

The researchers suggest reducing evening lighting, and the use of computers, during the hours of darkness.