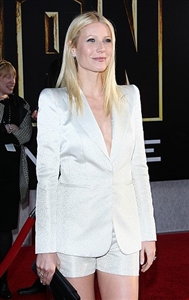 Gwyneth Paltrow has revealed how she lost weight for her role in new film Iron Man 2.

The actress stuck to a strict diet of protein bars, vegetable juice and recipes that included a “super-low” level of calories.

She also enlisted the help of her trainer, Tracy Anderson, who devised punishing workouts for the star.

“To really get in line, I followed her [Anderson’s] strict diet for five days to lose my extra winter weight,” the mum-of-two wrote.

She explained that she finds it difficult to diet, unless there is a goal in sight, but suggested that it was easy this time as her film role gave her motivation to shed the pounds.

Another actress who has been receiving help from Tracy Anderson in their plight to lose weight is Jennifer Aniston.

The ex-Friends star has reportedly lost half a stone recently thanks to the help of the exercise and diet guru.

Do you rely more on exercise or dieting to lose weight?