Gwen throw’s herself into ‘torture’ workouts 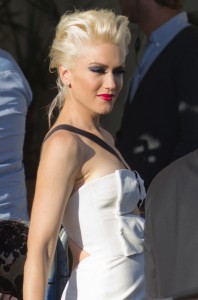 Star mum Gwen Stefani showed off her body on a family holiday last month however she appeared drastically thinner than usual, her trademark abs seem to have given way to the unsightly look of ribs and an almost concave stomach.

Friends have commented saying her hectic work schedule on top of relationship issues have resulted in her weight loss over the past few months.

Following an 11 year break, her band No Doubt recently performed at the Teen Choice Awards in LA and then in Central Park to promote their new album, push and shove which is due out in September.

Sources say “Gwen’s regime has seen her slim down, as she’s doing sweat inducing routines in the dance studio and rehearsals every day.  She’s addicted to the endorphin rush of working out in the gym five days a week, doing an hour of cardio, an hour of toning and 30 minutes of conditioning.  She describes it as ‘torture`.  She’s 42, so she says she has to work harder than ever.”

Gwen is always careful about what she eats, she has been known to take a personal chef with her on tour, so she gets enough calories to give her stamina, but without eating carbs.  Her diet is vegan, based largely on raw foods and grains such as quinoa.

On top of her workouts, sources say the singer, who before slimming down, usually a size 8, but is believed now to be a size 6 – has been rocked by recent revelations about her husbands past.  In 2010, he had a gay fling with ‘80s pop singer Marilyn when he was a teenager, then rocker Courtney Love claimed she’s had an eight-month affair with Gav while he was married to Gwen, which she then later denied.  The couple have two sons, Zuma, three, and Kingston, six.

Have you been following any grueling weight loss regimes recently?