Gabby Logan ‘I ditched wine and got my waist back’ 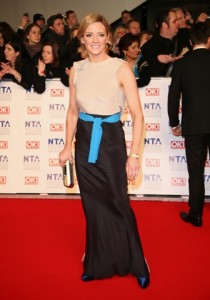 She may be the super-fit golden girl of BBC sport, but Gabby Logan admits that covering the Olympics has inspired her to work even harder to lose weight.  Gabby, who tried to conceive naturally with her ex-rugby player husband Kenny, 40, for three years before using IVF to have her twins Reuben and Lois, now seven, says: “Seeing pictures of Mo’s twins made me feel broody. I’d definitely have more kids – if I could conceive naturally, I would have been pregnant by now. “we hoped that, because we conceived quickly with just one round of IVF and I had no complications, it might kick-start my body into getting pregnant – but it hasn’t happened in seven years. “It’s a very deliberate thing to go through IVF again, but time’s running out. If it’s going to happen, I’ll be pregnant by this time next year. I won’t wait too much longer. Rueben and Lois would love a new baby!”. “They’ve given me a little kick up the backside!” she laughs. “Whenever I think I don’t want to do anything, I remind myself it’s only 20 lengths of the pool or a little run, which is nothing compared to the huge efforts of the Olympians.” And Gabby says seeing double Olympic champion Mo Farah, 29, with his new twin girls, Aisha and Amani – who were born in August, just 13 days after he won his second gold medal – has also had a big effect on her.

Although Gabby has never been a fan of slimming, the glamorous sports presenter says exercise is key to maintaining her size 10 figure. “It’s just become part of my life and I feel better for it,” she explains. “Every morning, I do about 15 minutes of yoga exercises to wake up my back. And, in a good week, I’ll also fit in a swim, run and bike ride.” The ex-gymnast – who was on course to compete at the 1992 Barcelona Olympics before she was forced to retire prematurely at 17, due to a chronic back condition – says her love of fitness helped her shape up after having babies, adding that she was back in her size 10 jeans just 10 days after giving birth! “Looking back, I was massive when I was pregnant!” says Gabby, who put on 3st. “It was unavoidable, as I was carrying twins. But I lost the weight quickly, because I’d been fit beforehand and my body had muscle memory. It makes a big difference when you’re pregnant.”

When it comes to her diet, Gabby watches her portion size and eats healthily, but adds: “There are days when I treat myself and have food I wouldn’t normally eat, or a few glasses of wine. But, if I’ve overindulged, I’ll just have a few days of being careful.” And Gabby reveals that covering football’s Euro 2012 and the Olympics this summer helped her lose her “wine weight.” She says: “As I’ve got older, I’ve noticed wine is a big factor in that middle area. I wanted to feel good about myself while I was working on Euro 2012 and the Olympics, so I had two four-week periods of no drinking.” Gabby, who used to have two to three large glasses of wine a week, revels: “Without changing my diet except for cutting out wine, I lose 4lbs and had more definition in my waist and stomach.” But she warns: “The trick is, not to replace the wine in the evening with a chocolate bar!”

For breakfast, Gabby, who is 5ft 8 and 9st 8lbs, usually has eggs, or yoghurt and fruit. “It’s my favourite meal of the day. Sometimes, at night, I’ll think, “Ooh, I’ll have eggs for breakfast tomorrow,’ which is sad I know!” She laughs. “For lunch, I’ll have a salad or make a soup. Then for dinner I’ll often have chicken with noodles, and I love monkfish.” She adds: ‘Kenny and I eat out a lot, but I won’t have all three courses. Luckily, I’m not keen on desserts.” Although she turns 40 next year, it’s not something that worries Gabby. She shrugs: “It’s just a number and I’ll get on with it. “Yes, you have to work harder at staying in shape as you get older. But you have to change what you expect from your body, too, because it will start to look different. How you feel inside is just as important. “The kids have grown up watching Kenny and I work out regularly, so I hope they see it as something that’s part of your lifestyle and not a chore.” So, when it comes to exercising with Kenny – who’s worked in sports marketing since retiring from rugby in 2003 – does Gabby ever get competitive? She says: “We work out together, running and cycling, but it’s more for company than competition. It’s more of an effort for Kenny than it is for me, as he doesn’t have to train for matches any more, but all I need to say is: ‘You’ve got a bit of a tummy there’ and he’ll train for three days straight. I’m a nice wife like that!” Right now, Gabby’s workout of choice is swimming, making her the perfect ambassador for a new Speedo campaign to encourage more women to feel confident as they hit the pool in its Sculpture swimwear range. Gabby says: “I love swimming because it’s great exercise for people of all levels. “It gives me a quiet time, too – no one can contact me on my mobile while I’m sorting out the day’s problems in my head I’ve done 20 lengths without realizing!” It’s clear that working out regularly and eating well has paid off for Gabby, but surely she must have some vices? “Coffee is my big weakness,” she admits. “I was importing coffee from Hawaii until I realized the exchanged rate had moved so much it was costing me £20 a bag! But I don’t smoke or do drugs and don’t drink much, so a coffee addiction isn’t so bad!”